Reconstruction of a high-rise bunker in Frankfurt 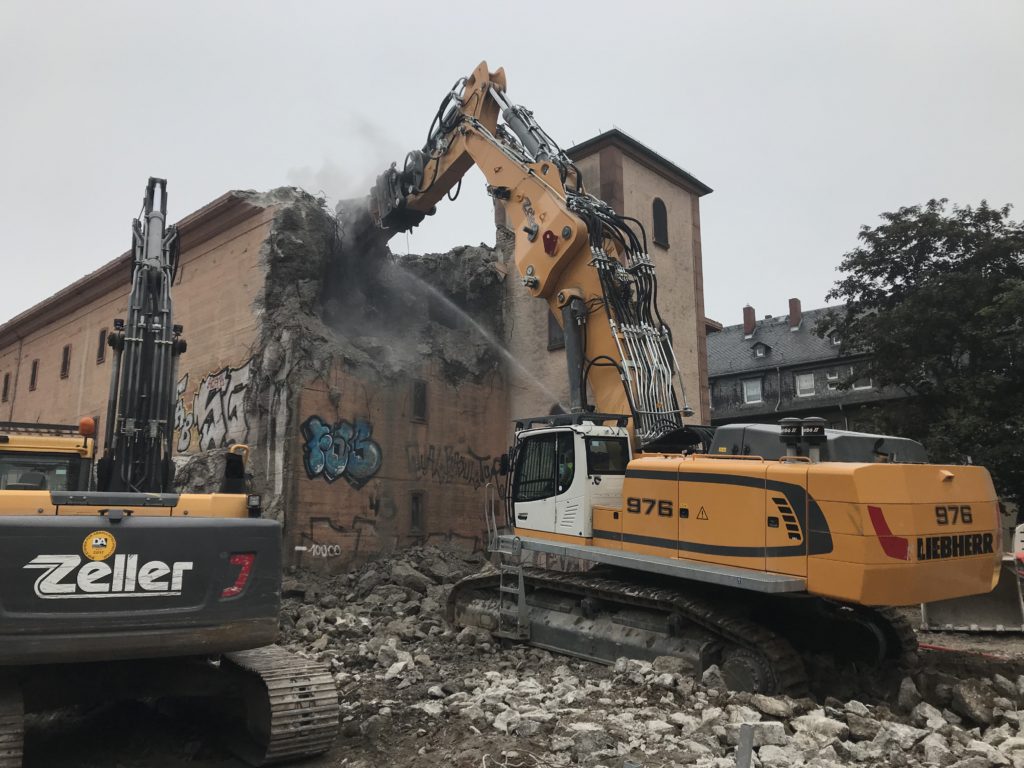 250 new residential units are currently being built on the former depot of Frankfurt’s transport company in the district of Höchst.

In the course of this development the bombshelter from the past millennium had to be removed without leaving any remains in order to create space for new living areas.

The bunker had two upper floors next to the ground floor and no underground level. On the air raid ceiling made of reinforced concrete was a bow-shaped masonry, overbuilt with pumice planks. The cubature of the bunker was a solid mass of about 6,500 m³.

The object to be demolished stood – typical for a bunker that once was intended for civil protection purposes – in a densely populated residential area, whose houses have just recently been built or renovated.

To comply with applicable regulations regarding noise and vibration, the demolition with heavy rock hammers were kept to a minimum. Due to the expert’s report this was clear beforehand. Thus, it was decided to loosen up the to 2 m thick components by blasting, or respectively reduce their cross-section, before the demolition by machine would take place, For this purpose, the company Robert Zeller GmbH & Co. KG from Offenbach / Main was commissioned with the blowing-up and demolition by the Züblin AG.

Due to the dense neighboring building, which was in some areas right next to the object to be demolished, the vibration prognosis by the engineering office Dr. Lichte was an important guideline to define the technical parameters of the planned blasting.

The vertical holes in the air-raid ceiling were made with a silenced excavator extension. These were created in a grid of about 0.60 m x 0.60 m, while the maximum load per drill hole was about 0.20 kg.

For the production of vertical drill holes into the 2 m thick outer walls, an additional drilling device, type Sandvik Comando 130, was rented from Thüringer Spreng GmbH, also a member company of the Deutscher Abbruchverband (German Demolition Association). The demolition of the wall was done in sections. The task was to reduce the cross-section of the wall down to approximately 1.60 m, so that the following mechanical reconstruction was possible by using demolition tongs.

After the first wall blasting, which was monitored at 4 points by the engineering office Dr. Lichte, the quantity of explosive and the initially selected specification was adapted to the local conditions and thus, the blasting result optimized.

It was therefore still possible, by producing only one row of drill holes, to blast off about 0.60 m of the wall. Thus, the remaining residual cross section of the wall was reduced to only 1.40 m. For this stretched explosive devices were used, which were ignited electrically.

The subsequent demolition of the reinforced concrete structure was then carried out with a Liebherr R 976 hydraulic excavator, equipped with a NPK S100.

The reconstruction of the 1.40 m strong components – which were already damaged due to the blasting – went smoothly, so the actual aboveground demolition work was completed within 5 weeks. 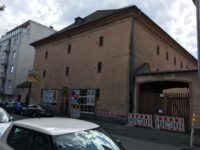 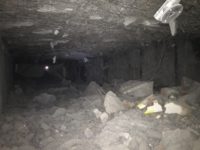 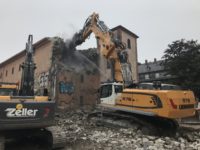