Conversion of the old Oberpostdirektion in Frankfurt 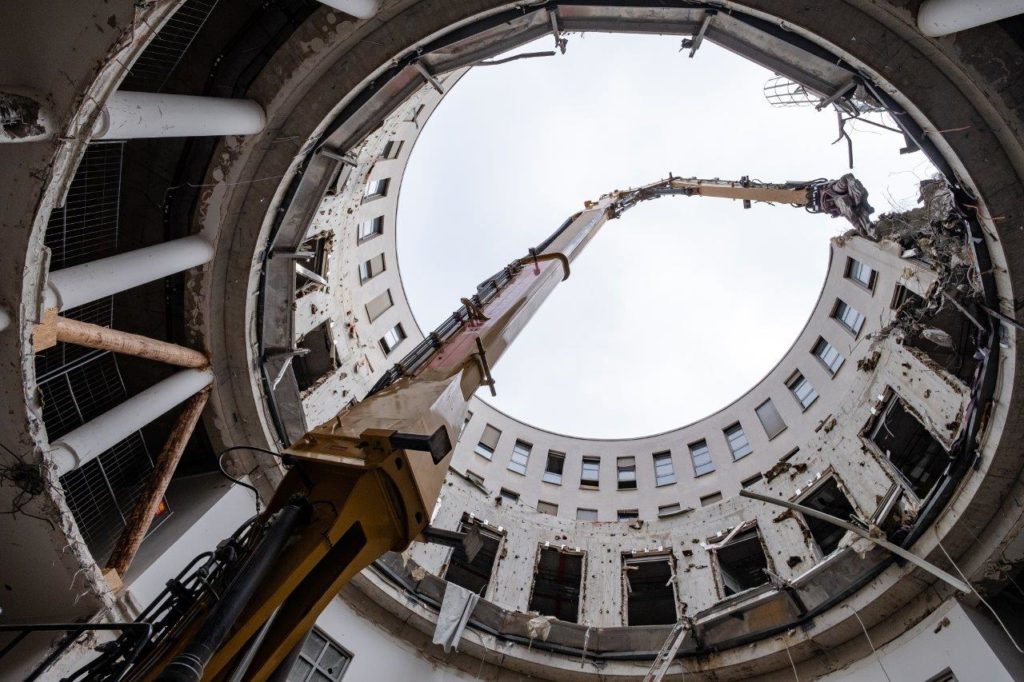 From neo-baroque into the future

The building, which is far more than 100 years old and a prime example of Wilhelminian splendour, is currently entering a completely new chapter. The listed jewel, whose facade is reminiscent of a grand hotel, will soon house 164 luxurious condominiums.

In the past, telegraphy, connection and mail sorting used to take place here: In the building of the old Oberpostdirektion in Frankfurt, Ludwig-Erhard-Anlage 2, nothing reminds of old telecommunication times anymore.

In the meantime, the so-called Westend Palais, in which the representative apartments are being built, has been completely gutted by Hagedorn.

The contract: Dismantling of the complete inner courtyard area (new construction) between two existing components (historic old building), demolition of barrel-shaped roofs on two building parts as well as the demolition of a connecting corridor integrated into the old building.

Not made of cardboard: New construction in the old building

The special feature of the complex: A new building was erected in the inner courtyard of the historic building in the 1980s. Old and new walls were connected and supported each other. This meant extensive static calculations for the deconstruction of the entire interior with internal parts of the building, a rotunda and a large trading hall. Without the supporting inner part, the old building would not be able to withstand the deconstruction measures. An ingenious demolition statics system provided the solution: this included elaborate wooden-steel constructions that supported the historic walls. After all, 15 tons of steel and 15 tons of wood were used. Only then a mini-excavator and a 30-tonner could take up their work inside. However, for the upper areas of the building, which is more than seven storeys high, heavier equipment was required.

But how do you bring a 17 m long and later 26 m high 90 t excavator through an opening of just 4.20 x 3.80 m into the interior of the new building? First of all, a smaller excavator was used to nibble an opening into the inner courtyard so that the large excavator could enter. However, it had to be coped with obstructive supports that could carry a load of up to 120 tons.

The Hagedorn experts temporarily deflected the loads in the storeys above by means of additional supporting structures – thus the supports on the ground floor could be removed for the entrance of the large excavator. The machine operators removed the boom from the KMC 600 Hitachi, lifted it onto heavy-duty rollers and rolled it through the newly formed passage area into the rotunda. Only then was it possible to manoeuvre the “fat man” into the former cash hall with a great deal of sensitivity.

Surprise in the walls

“With listed buildings, nothing happens like that,” knows Roland Steinberg from his experience with numerous projects of this kind. Historic buildings require special knowledge, a great deal of sensitivity and usually include surprises that can mess up time schedules. In the case of the old Oberpostdirektion, the challenge was to separate the old from the new. But the fact that the old and new building were not only architecturally intertwined in the 1980s provided the next surprise: the cavities between the old and new walls had been filled with mineral wool instead of polystyrene. When concreting the new walls, the concrete then flowed into the permeable wool. Solid concrete walls, mineral wool and old masonry had entered into an intimate symbiosis. Rapid removal of large concrete wall areas? No chance!

Slotted and not shaken

Here, too, the Hagedorn team found a solution: all walls were provided with slots. By cutting the concrete parts into small pieces, they were able to be removed without tearing out old masonry.

Roland Steinberg: “What counts with such a large order is that in the end reliable and practicable solutions ensure good construction progress and all parties involved work hand in hand. In our client, the CG Group, we have a very constructive partner.”