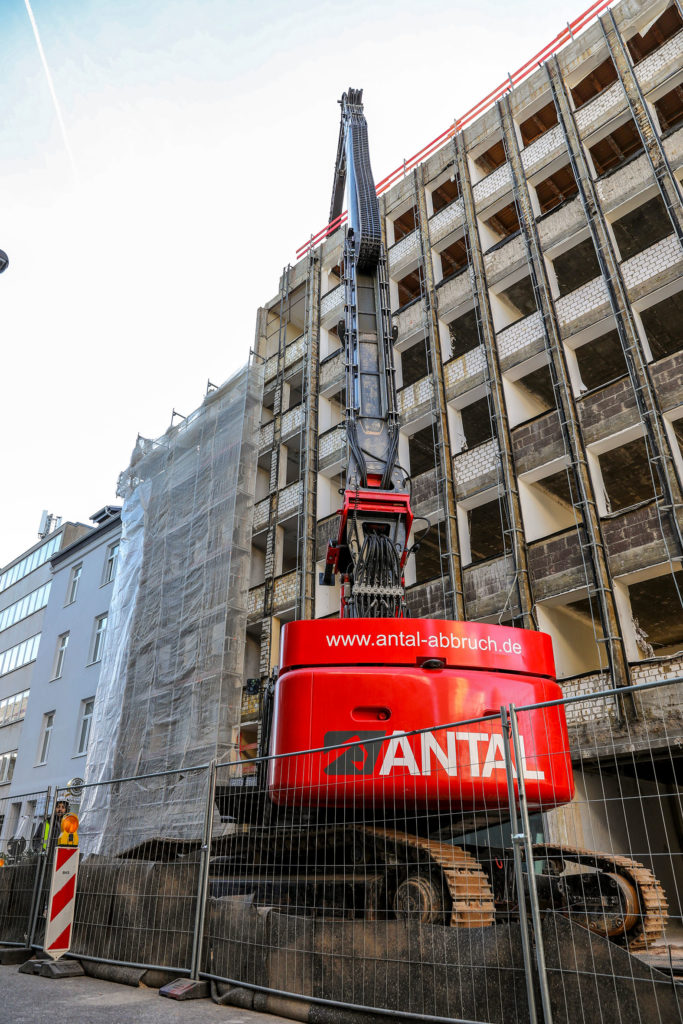 It is a demolition like many others for the Antal Abbruch & Baumanagement GmbH. Including all typical pitfalls that the dismantling of a skyscraper in the middle of Frankfurt causes.

Not three meters apart from the building passes the road of Mainz, one of Frankfurt´s big arterial roads with several thousands of vehicles a day. Not two meters far off are the contact wires of the tram that is driving at minute intervals. Not one meter away is a mobile medium-voltage station. The setting around the demolition building does not make the process easy for the team surrounding George Antal and Daniel Deigert, project managers at Antal Abbruch & Baumanagement GmbH. In addition to that the skyscraper itself has its pitfalls with a height of 32 meters. It is shaped like a L and snuggles up against the neighbouring buildings at the right and the left side in a force-fitted compound. That is why just tearing it down is not possible. “It seems to be really difficult at first”, Deigert explains,

“but exactly these open-heart surgerys is what we are specialized in. This is part of our daily routine.”

Since autumn last year the red KTEG Multi Carrier KMC600-6 is also part of the daily routine – it is an excavator of 60 tons with a hydraulic exchangeable 34-Meter-Telescopic-High-Reach boom, three circular Tritec-hydraulic system, placed on a one meter long retractable undercarriage and a tilting cabin for a better view upwards. “That is an extremely flexible machine”, says the owner George Antal in joy, “and exactly that is what we need here in the city.” Because the place where the demolition happens is very narrow, the city only allowed a closure of the crossroad for two days. The traffic on the road of Mainz itself cannot stop.

It is obvious that a building like that cannot be torn down at a cramped place like this in two days. That is why the plan for the dismantling was quite different: The KMC worked itself through the middle of the building to the inner courtyard within two days. There it removed the building in the space of one week. Then it changed from a long boom to a short one and committed itself to the basement and the fundament.

“Due to the exchangeable boom we got two excavators in one: a longfront excavator and a regular excavator”, tells Deigert.

“Without the KMC we would have had a lot of work and great costs, because of the otherwise necessary exchange of different systems of excavators. With the KMC and its exchangeable boom it is much easier now”, Antal says delighted.

It is his second Kiesel Multi Carrier. He already purchased his first one, a KMC 400, two years ago. “I liked the pioneering spirit of Kiesel. Toni Kiesel and his team are highly innovative. That fits us and our philosophy”, explains Antal. “We are also actively taking our future into hand by ourselves.” Already today his company belongs to the global players of the region Rhein-Main.

Thereby the Antal Abbruch & Baumanagement GmbH is not even 20 years old. Two generations work here – besides George Antal his father Vasile and his sister Christina Deigert-Antal are on board as an authorized officer and an architect and construction manager.

Meanwhile the company constantly grew up to about 200 employees.

Part of the company´s range of services are gutting, pollutant decontamination, steel construction for static actions, demolition, shoring and earthwork – all these services also have been made use of by the client of the construction site at the road of Mainz. During five months of work, 2.460 cubic metres of enclosed space have been professionally torn down and disposed. What was left is a neat gap that shall be closed with a new building soon.

The neighbours of the adjoining buildings are relieved that during the demolition emphasis has been put on not taking any risks and carefully respecting all static demands. “This is where we are very precise”, Daniel Deigert explains “because we take our responsibility for a professional dismantling just as serious as the expectations of the people who live in the immediate surrounding.”