Dismantling of a former nuclear shelter in Hanau 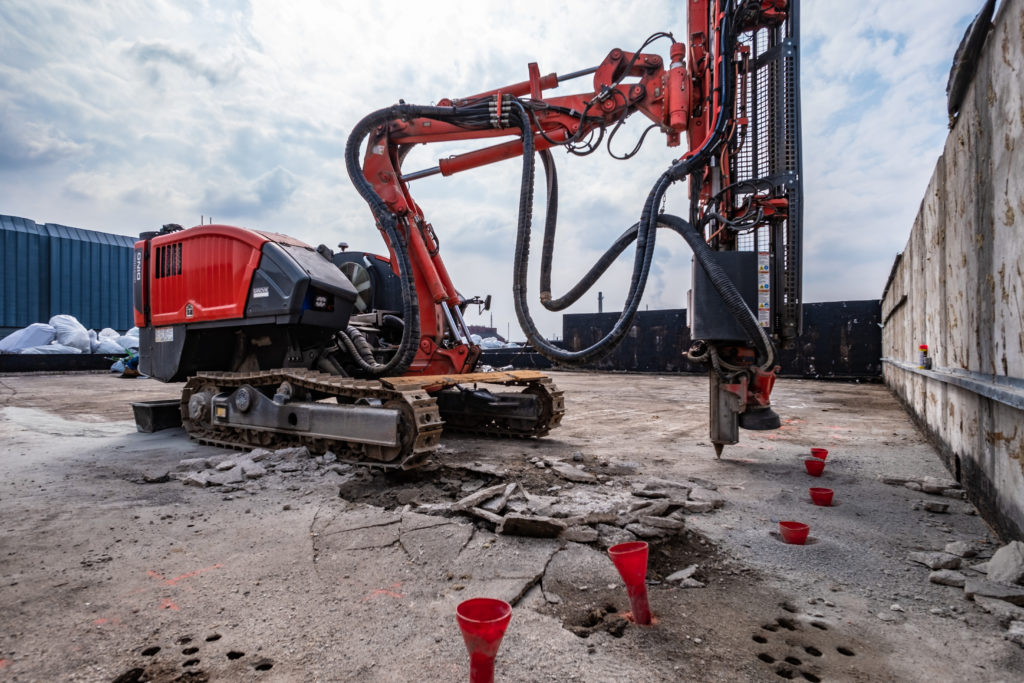 “Right here is where a plane could have dropped, and nothing would have happened. Now we are showing that something is happening”, says project manager Markus Heimeroth decisively.

No light, no sound, no reception for the mobile phone. Deep inside the massive construction it is an oppressive feeling. The outside world is successfully shielded with two meters of thick walls and ceilings. Exactly because of that plutonium containing fuel elements and at times nuclear fuels have been stored in the bunker in Hanau.

Hagedorn is charged with the elaborate demolition, the pollutant decontamination and the disposal of the unused bunker. At the beginning of the 80´s the bunker for fissile material has been arranged at the area of the further production facility for mixed oxide fuel elements. Among other things it stored nuclear fuels for nuclear power stations. Instead of the massive block, around whom the industrial park Wolfgang settled in the meantime, there is going to be a Multi-User-Property with an area for logistics and industry.

Drilling, bursting open and biting off

Before the estate is going to be ready for building, the demolition team from Hagedorn needs to do its job. But how do you move to the body of a colossus made of concrete and steel? “Because of its bulkiness we are starting off with blasting for ease. Hereby we are working hand in hand with experts from the German Blasting Union”, explains Markus Heimeroth. That is hard work, because the drills for the explosive material are brought in with several big drilling implements of 12 tons from the 3.500 square metres large roof. The reinforcement irons, with a diameter of 28mm, are placed apart from each other in several levels and in a grid of 10 centimetres. That means that ceiling and roof need to be drilled out in a precise area of 70×70 centimetres that is 1,2 or rather 4,5 meters deep. When the blasting for ease is done and the structure of concrete is destroyed, the demolition shears can start attacking.

“The drilling is going to take about 12 weeks. We are going to use this time to dismantle the neighbouring buildings (also massive reinforced concrete)”, explains foreman Thorsten Ullrich. What is most important for a fast progress with this extremely difficult task: a perfect time management that takes the change between blasting and mechanical dismantling into account. In other aspects specialist knowledge is also in demand: A high groundwater level of about 1,4 metres below top ground surface provides for an increased sound transmission during the dismantling and blasting works. To make sure that it is not getting problematic, for the production, of the company BVS nearby, where highly sensitive, electronic assemblies are being produced, the experts are constantly measuring the vibration with two measuring devices. The team around foreman Ulrich has got everything under control. In the next months the men will be professionally working themselves through steel and concrete with their mechanical light- and heavyweights. This results in 90.000 tons of construction waste which is directly recycled on the spot to be used again. At last the experts from Hagedorn take care of fragile precision work. Together with a specialist of construction biology a sand lizard´s habitat is going to be created – a condition of the environmental authority. “That is also what we will do with pleasure. The customer nearly does not need to take care of anything”, Markus Heimeroth summarizes.