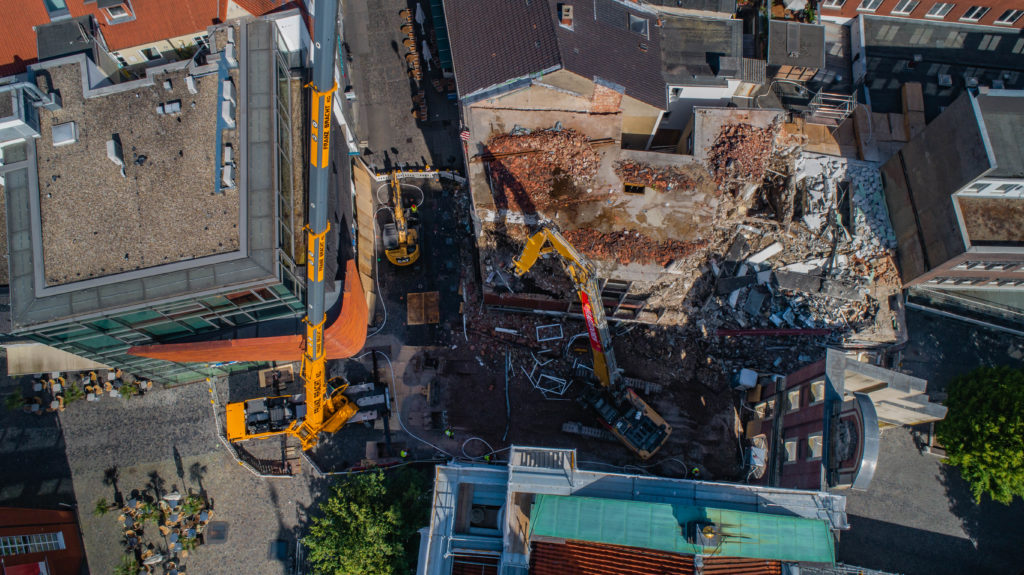 When the construction machines can comfortably drive up, enough space for manoeuvring is available and the entrances and departures are freely available, the conditions for complex dismantling works are perfect. In practice that often stays a wishful thinking as well as the conditions for demolition projects present challenges.

Muenster, June 2019, 34° C. Who is not pleased with an air-condition at temperatures like that? Peter Elstermann, driver of the longfront excavator at Hagedorn, is glad that his machine does have air conditioning in his driver cabin. Metre per metre he carefully works himself ahead with the crusher. The preparations of the coming dismantling have already been in full progress since a week, after all a four-storied building shall give way to something new in the middle of the lively pedestrian zone in Muenster´s city centre. The Salzstraße is considered as the oldest trading route of the Westphalian university city. But the working environment is not optimally designed for the heavy devices. The team from Hagedorn gets confronted with narrow alleys and listed neighbouring buildings, like for example the Dominican cathedral from the 18th century.

An excavator of 100 tons in the pedestrian zone

At this point experience and extreme caution are commanded. Because the longfront, an excavator of 100 tons with an arm length of 34 m, is not particularly suitable for a pedestrian zone. How can the excavator be shunt here? Where shall the construction waste be stored, and which possibilities exist to drive it off? Not an easy task, because the on the supported basement ceiling storing temporarily construction waste can for example only be evacuated early in the morning before the life in the city centre begins. Furthermore, the building that shall be demolished and the neighbouring building have a common wall. An information that the plans did not doubtlessly release before. Because of that the common gable wall will be separated manually by stemming and sawing. In the end the building needs to stay stable during the demolition. Safety comes first! The team from Hagedorn inter alia succeeds in doing so due to that the reinforcements get intersected floor by floor just before the demolition by technicians. Additionally, the building gets supported by experts to ensure a nearly complete steadiness. To make sure that the neighbouring building such as the pedestrian zone do not get damaged, Hagedorn made appropriate safety precautions. For maintenance of the ground area a sand bed has been prepared.

To make sure that the demolition can be executed preferably trouble-free there are some things that need to be considered in the run-up. This includes for example tasks like the elaboration of the driving routes such as schedules and safety plans. Moreover, the residents need to be informed and walls, ceilings, grounds, static and capacity examined. Besides the technological chronology of the machines gets determined a long time in advance so that all work can be done on schedule. In addition to that the demolition of the building on the part of the city is knowingly performed simultaneous to the restructuring of the cathedral, because then the cathedral is already secured. Furthermore, the team of Hagedorn carefully controls the vibrations that are caused by the demolition to ensure that the necessary limits get fulfilled.

It is the day of the final demolition with the longfront excavator. To keep the noise and dust pollution preferably low a demolition drape serves as protection. Several nights before, Peter Elstermann drove the longfront excavator with a lot of precision and sensitivity through the narrow alleys of Muenster. Because of that he can begin with the demolition of the roof truss in the rear part of the building on Friday and Saturday. To make sure that Hagedorn can demolish the front part of the building without any problems the Salzstraße gets blocked completely. The team only has about ten hours to dismantle the 15 m high building. Until the evening 5.000 tons of construction waste get created. The red Hagedorn trucks drive off the mineral and non-mineral waste – strictly sorted and separated – hollow per hollow. At 18 o´clock the dismantling is considered as done. Due to that the longfront excavator can already be driven back through the narrow alleys of Muenster like a raw egg in the night between Monday and Tuesday. At the same time mobile and envelope circle excavators get delivered to take over the reworking of the construction site that takes a few days. After extensive preliminary work and fast and precise performance the residential and office building in the city centre of Muenster is history and space for something new has been created.