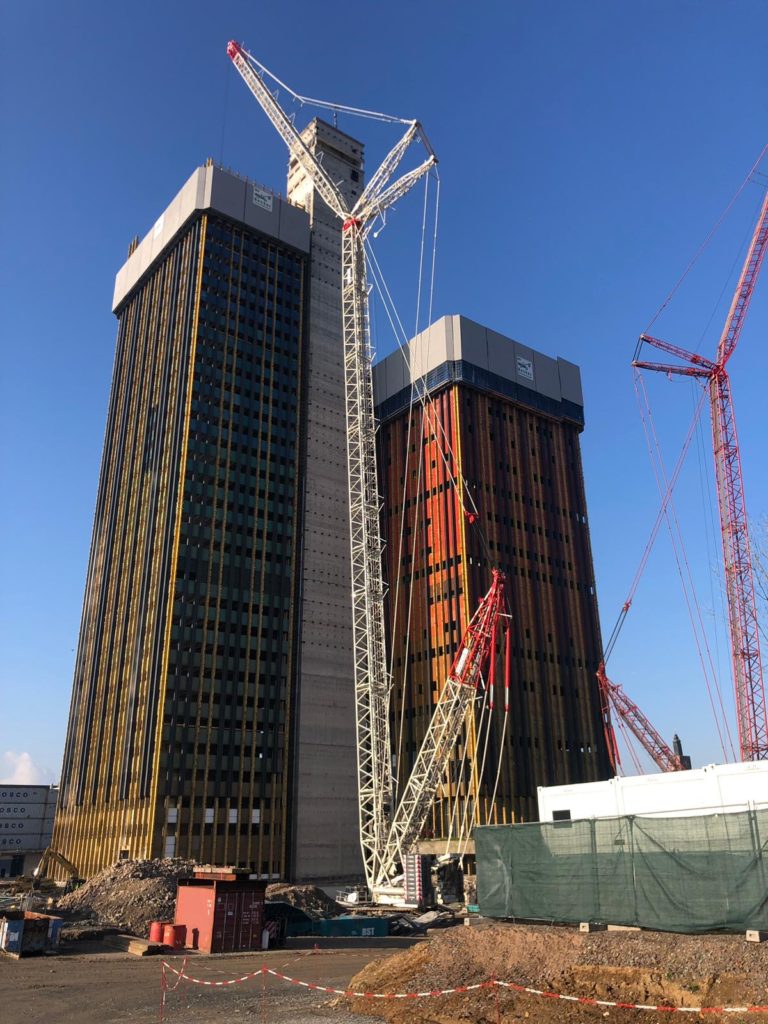 In December of 2014 after months of negotiations the BST Becker Sanierungstechnik GmbH has been charged with the demolition of the three towers of the former Deutsche Welle in Cologne.

Since in the course of dismantling these three towers (elevator, studio and office tower) that are built in steel skeleton structure an extensive asbestos decontamination also needed to be done, the actual dismantling of these high-rise buildings can only start now. Hereby particular value was laid on the recovery of secondary raw materials that are gained as single-origin mono fractions and brought back to the waste management. To this especially mineral building materials, glass, steel, aluminium or copper belong to.

“All of us know about the lack of available primary resources in our own country“, emphasizes Michael Pfeiffer, managing director of BST Becker Sanierungstechnik GmbH, who with his board of management mandate in the Deutsche Abbruchverband e. V. assumes responsibility for exactly these subjects. The diploma economist Michael Pfeiffer, as an honorary member of the board, is responsible for the professional committees recycling and disposal such as pollutants. Christian Becker, not only name giver but also second managing director of the BST, stressed the great effort that is behind the targeted resource recovery. Measured by the quantities and qualities that can be brought back to the economy´s cycles of materials this is certainly a price that one gladly accepts.

The Deutsche Welle Cologne has only been put into operation in the year 1980. Already after just a bit more than 20 years the building needed to be evacuated due to the high pollution exposure so that the complex has been vacant since then.

With its barely 140 m the Deutsche Welle is going to be the tallest high-rise building that has ever been demolished in Europe.

After the elaborate asbestos decontamination, now the second phase of the demolition, the actual dismantling of the steel construction, the facade and the mineral building structure began in the end of October 2019. 360.000 m³ of enclosed space with about 18.000 tons of steel and around 140.000 tons of concrete need to be dismantled. What makes it tricky is the closeness to the neighbouring high-rise building where the Deutschlandfunk that is fully in operation is placed. Specially designed dismantling and noise protection concepts specify the extremely thorough and meticulous procedure for the trained specialists of BST on the spot. Every individual step is performed after static guidelines. On side of the BST Becker Sanierungstechnik GmbH under control of project manager Michael Wagner two site managers and four polishers need to be at the construction site constantly to monitor the procedures in the next weeks and months. An external appraiser such as an expert for work with asbestos accompany the project from the beginning. Nothing at this construction site is being left to chance.

The lately attached Doka climbing formwork already climbed the office and the studio tower. The dismantling of the 122 and 80 m high towers goes on full blast. In the process with every dismantled floor the formwork climbs down again. Under cover of the climbing formwork (fall, noise, dust) the employees of BST prepare in different teams for the removal of the building. At first the expansion of the facade components takes place. The gained single-origin aluminium gets put in the of the recycler provided containers and departed weekly. The same procedure happens with the windows. After the joint tapes have been removed, the glass gets loaded separately and made available for recycling too. The still existing sandwich elements in the external facade containing asbestos get divided from the steel frame in a separate area for remediation, packed in a non-destructive way and disposed. The steel gets cleaned and brought to scrap recycling. After the dismantling of the facade the ceiling fields get taken of their hinges after strict statistic conditions. Therefor the ceiling gets split up in individual fields by means of a sawing process. After that core drillings are performed along the joints of the ceiling. These serve as attachment points for the transport of the ceiling. As soon as a ceiling element hangs in the crane the rest of the cuts in the ceiling are made up for, the supporting structure below the ceiling gets parted from the supporting structure with a flame cutting procedure and ceiling field per ceiling field get transported to the ground by a crane. At the same time inside of the concrete core all walls of limestone get dismantled by means of a demolition robot so that only the actual concrete walls still need to be dismantled in the cutting process. For that the outer wall elements of the concrete core are being cut and after sawing the attachment points also being put down to the ground by a crane. On the ground the needed conditioning and separation of the elements takes place to make gaining further secondary raw materials possible. Hereby it is made sure that the mineral building structure gets separated from iron and steel. Because of a residual load of asbestos fibres on ceilings and walls, that cannot be excluded, every element that gets transported by the crane is being put in a specially therefor arranged area of remediation. In a tent the steel girders on the ceiling elements are being split up from the Holorib compound ceiling, getting cleaned and subsequently brought to further recycling. Therefor a specifically with the authority and the district government coordinated, and in several sample remediations developed, measure has been realised. After the ceiling fields have been processed and taken out of the remediation area, following the wall elements get milled by means of a BT 40 procedure and prepared for the processing of the concrete construction waste. At last the supporting elements that are coming loose get separated with flame cutters per floor and after that cleared out. For this at the office tower there is a crawler crane from Terex Demag CC 3800 with a height of 194 m available. Following to the office and studio tower, the elevator tower gets dismantled with a stemming and sawing procedure. Also, for that it is worked of a stage and the cut out concrete elements are getting carried to the ground by a crane. Thus Europe´s biggest high-rise building demolition with nearly 140 meters takes shape.

“Because of the consequent realisation of our substance flow concept not only the production of a high-quality concrete recycling construction material for the backfilling of the caused construction pits is successful. Of greater importance hereby is, according to the waste management, the substitution of primary raw materials, like mountain gravel or sand-lime brick, that do not need to be delivered.  Due to the saving of run-up and run-off freights for bulk materials about 10.000 truck operation hours could be saved which positively affects the carbon footprint“, said diploma geologist Michael Maurer, department manager for disposal and material flow management from the company BST.

“The demolition industry has not been a grey mouse in a long time: besides the engineering services that are by now usual and asked, supervised or rather certified by RAL, SCC and QM, by now most demolition contractors and members of the Deutsche Abbruchverband e. V. (by now more than 700 regular members Germany-wide) understand that gaining potential secondary raw materials is going to be more important than ever in future for the demolition world. In times of raw materials becoming less and less and a lack of landfill capacities that is an important element for the backup and organization of our future. Urban mining cannot be stopped anymore and should be encouraged and supported more by politics“, summarizes Michael Pfeiffer, representative for all demolition companies

In the end BST processed, backfilled and prepared an area of about 56.000 m² for the planned residential and industry units for its client DWK Deutsche Welle Köln GmbH.