Special demolition at the airport

In the end the compliance of a narrow time frame was only possible because of a special demolition concept.

The dismantling of an overall 70 m long section of the old airport´s tunnel in Frankfurt a.M. posed a special challenge for the from the Fa. Wayss & Freytag Ingenierbau AG instructed Robert Zeller GmbH & Co. KG (i.F. Fa. Zeller) from Offenbach. This challenge consisted of dismantling approx. 1.400 m³ mostly very largely reinforced concrete within 22 days in day and night shifts. That time period was provided by the building owner, the Deutsche Bahn AG, who established a blocking period over that time.

Hereby there especially was one circumstance that made the task so special and difficult: A new tunnel that functioned as a compensation for the tunnel that needed to be dismantled, has already been created and was partially located in a distance of only 10 cm to the object of the demolition. Therefore, special attention had to be turned to the new construction that by no means could get damaged. That circumstance linked with the local spatial conditions in the tunnel as well as component strengths of about 0,90 m made the conventional demolition with large devices nearly impossible which is why this demolition technology could not be pursued any further.

Because of that the demolition concept, which has been a basis of the tendering, has had a dismantling by sawing in mind, but out of time and financial reasons this concept resigned. Due to a special proposal that has been developed and coordinated together with the from Fa. Zeller engaged demolition structural engineer, the company Fa. Zeller obtained the surcharge for the demolition after all.
The concept had a complete destruction of the southern tunnel wall by blasting and a section blasting of the northern wall (joint disruption) in mind. Due to the simultaneous failure of the two ceiling supports, the 0,90 m strong reinforced concrete ceiling should lower thus far that it could be crushed with excavators. Then an inclined position of the ceiling elements was desirable for the mechanical demolition. The full dismantling of the northern wall was not intended by the building owner as well as not necessary for the further construction progress.

Provision
The blasting should take place in small approx. 2,00 – 3,00 m wide segments whose contours have already been pre-cut by a diamond saw before the blocking period. At this point the complete severing was either because of static as well as because of safety-related reasons not possible and could only take place after there was no rail traffic on the route anymore.
That way 36 segments set in that needed to be blasted, mechanically crushed and transported out of the tunnel within 526 hours.

The producing of the horizontal, approx. 0,55 m long boreholes in the southern wall could take place during the ongoing train operation. This was possible because for producing these holes, driving on the track system was not necessary. The drilling of these holes could be performed by the drilling instrument Sandvik Commando DC 130.

Since the boreholes in the northern wall hinge had to be already set up before the actual provision of the blasting and demolition works due to time reasons, it should happen during the nocturnal train stops however the Commando DC 130 that weighs approx. 3 tons did not allow driving on the tracks. Because of that the overall 550 necessary boreholes in the wall hinge have been created by core drillings in five nightshifts.

After the railway line has been officially closed on the 25th of October 2019 by the operator and been released for the demolition, at first the overhead lines and the track systems such as the ballast bed could be removed. An access route to the actual demolition place in the form of an about 300 m long construction road has also been built by the company Fa. Zeller. After that the final separation cuts (approx. 0,10 m) of the individual segments could be performed by an excavator attachment saw so that the first blasting could take place on schedule on the 29th of October 2019 at 18:30 o´clock together with all project managers. At this point the first small section AB04 has been put down and in the following been crushed by a Volvo EC 380. The removal of the masses of concrete out of the tunnel happened with a wheel loader Cat 966 H.

Then the dismantling by blasting as well as in alternation the following mechanical demolition of the remaining 35 segments took place 24/7. To this the company Zeller engaged about 5 blasting entitled persons, as well as 6 machine operators and 8 blasting or rather construction helpers daily. The used machinery included following devices and machines:

All in all, about 1.500 boreholes have been made and staffed with approximately 600 kg of explosive material and fired in 20 single blasts.
1.400 m³ of reinforced concrete have been demolished, transported, recycled, loaded and departed within a time period of 20 days. Because of the used dismantling technology, the date that has been set by the building owner could be shortened about 2 days and during the provision it turned out to be a fast, safe and reliable mean to perform this special challenge in a satisfactory manner for all participants. (Dipl.-Ing. (FH) Simon Zeller) 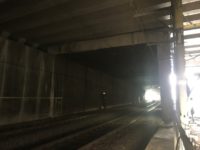 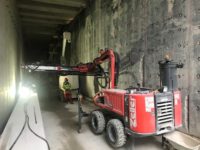 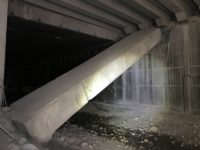 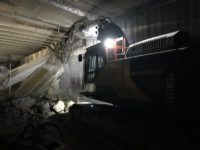